My story starts in the small town of Chandler, Oklahoma. I always had big dreams and I grew up as the typical big fish in the small pond. I wasn’t sure where I wanted to swim first but I always had a love for animals and the outdoors, particularly aquatic animals. My mum said my obsession started when I was 2 years old when I fed a dolphin at the zoo and from then on I was hooked.

As I got older the time came when I needed to make a decision about what university and what subject. Pressures from others led me down the veterinary track and later I focused on marine mammals to settle my obsession with my dolphin friends.

This decision led me to The University of Tulsa in seeking a biology degree. Once I began volunteering at the Oklahoma Aquarium, I was drawn to the wonderful biology of the elasmobranchs. My time spent next to the bull shark tank increased, as well as my shark conservation Facebook posts and literature searches.

I soon started searching for marine conservation volunteer opportunities around the world and Projects Abroad was at the top of my search. They offered a marine conservation project in Thailand that would certify scuba divers during the project. So off to Thailand I went where I had phenomenal first dive experiences. I made connections with people who had similar passions, and it sparked a fire in me that drove me to apply for university further afield.

I found myself on my way to the University of Hawaii where I am currently in pursuit of a Biology BA degree with emphasis on spatial ecology. The first day I set foot on campus, I was drawn through the door of the Marine Option Program office. Once I heard about the scientific diver course and the Quantitative Underwater Ecological Surveying Techniques (QUEST) field school, I did everything I could to qualify. After I completed the scientific diver course, I participated in NOAA’s Marine Underwater Techniques course.

About 6 months later, Ingrid Sprake from Projects Abroad sent me a link to a new project launching in Fiji. It was solely a shark conservation diving project, my dream project. I had to do it. I then planned my entire summer around those sharks.

My Time in Fiji

As a QUEST graduate, fresh out of the water, I was ready to travel to Fiji and tackle the new turf. Little did I know that this adventure would be one of the most influential, exciting adventures of my life.

Besides the long sickening bus ride, my first day in Fiji was amazing. I instantly felt like family when I was collected from the airport and taken to the accommodation. It was a day off from placement and so most of the volunteers were elsewhere.

After the first day I met fellow volunteers from all over the world: Australia, Germany, France, England, Switzerland, Italy, Austria, Canada, and India. I also became good friends with two volunteers from the US and the UK. I felt right at home in the accommodation and everyday was fun-filled.

The close living quarters allowed all of us volunteers to hang out when the work day was over and chat about similar interests. We would all make treks to the nearby Arts Village and Uprising resort beach on our time off, which strengthened our teamwork on our work days.

My first dive was phenomenal; soft corals and pinnacles 15 meters high. With the dive experience I had accumulated over the past two years as a student, I felt completely at ease. I helped a lot with the training of the new divers by being a safe and attentive buddy. Since I did have the necessary experience, I got to go on a shark dive in my first week and this is managed by the local dive shop, Beqa Adventure Divers.

The dive masters go out early in the morning to prepare for the dive. They put bait in the bait boxes at the bottom so that the bull sharks will be lured away from the upper water column where we (the other divers) will descend.

This particular dive site, Shark Reef, is a marine reserve leased from the local village. It is one of the healthiest reefs in the Pacific and it is home to the largest bull sharks in the world. The owner of the dive shop sacrifices 2% of the reef for this ecotourism and $20 from each diver is given back to the village since they allow the use of this reserve.

The dive is orchestrated in a manner sort of like a tight military operation, and for good reason; BAD has a 100% safety record for this dive. The first stop was straight to the bottom, 30 meters, then 15 meters, and a safety stop at 3 meters.

Once the trash can top opened to release the food, in came the sharks. The feed allows us to witness the grace and control exhibited by these commonly associated ‘ravenous eating machines’. The beauty of these giants is inexplicable, and anyone else who has seen this phenomenal event would say the same; you had to be there.

I never really was afraid of sharks to begin with, but this species are considered the most dangerous shark in the ocean today. It is not that they should be mindlessly feared, but their immense stature and apex capabilities should be respected. Any skeptic about sharks would be dumbfounded and speechless if they were as close as I was to them.

There is so much more to these creatures than even the most experienced behavioral scientist on the project can understand. I still can’t comprehend it even after having done two of these dives – it was one of the most breathtaking experiences of my life.

This was not the only event the project allowed us volunteers to participate in. I got to dive on the roaming surveys of sharks, rays, turtles, and indicator species within MPAs and control zones of the lagoon. Out-of-water training was needed to learn all of these species before actually diving.

The survey dives were remarkable. I saw white tip reef sharks on almost every dive. I also got the privilege of coming within touching distance of a stunning zebra/leopard shark resting on the bottom - I admit I was squealing with excitement through my regulator bubbles.

My next favourite moment of the surveys was when I got an eerie feeling and moments later a female grey reef shark darted out of the dark nowhere. I was more scared of her than I was of the bull sharks! I tried to get the attention of the divers in front of me. That was her turf and we were right in the middle of it and so she circled the dive group. This was a priceless moment for sure.

Volunteers also got to assist in the dropping of the Baited Remote Underwater Video (BRUV), which was just a metal frame with a bait box extended on a pole. A camera is mounted inside the frame so that it can be recording for 90 minutes while we went to another site for the roaming surveys. This way the project was able to collect presence/absence data with and without diver presence. Right before I left, a BRUV picked up footage of a female tiger shark that devoured the tuna carcass that we had tied to the bait box - that was fantastic day for the project.

Along with these surveys of adult sharks, the project also encompasses the tagging of juvenile bull sharks in the river nearest to Shark Reef. The babies are caught and before they are released, they are brought on the boat and injected with a Passive Integrated Transponder (PIT) tag into the tough skin behind the dorsal fin. The tagging of the juveniles is so crucial to understanding if those babies are the ones that go to Shark Reef when they become adults.

The project was also heavily involved in habitat restoration for the juvenile bull sharks by the raising and planting of mangroves. Ron, the man in charge of the village outreach and mangrove nurseries, launched a huge community recycling project which consisted of the villagers collecting bottles for pay so that the mangrove propagules had a container to grow in. This provides a service for both the mangroves and the communities by reducing waste through community involvement.

Given that the local villages have rights over Shark Reef, as well as other neighbouring reefs, community education is another crucial aspect of the shark conservation project. I participated in several community outreach activities such as painting a kindergarten building, planting nutritional plants for village use, and playing games related to shark education. The more involved the project is with the locals, the more the villagers are willing to accept the conservation efforts, and this therefore establishes a stronger impact of the project.

It was a bittersweet moment leaving the project. As a scientist-in-training I was most impressed with all of the science underlying the project and how willing the staff was to share their knowledge. I was able to see science in action as well as conservation efforts making their way up the chain to actually change environmental policy.

I was able to secure awesome references from the lead scientists and I can see myself traveling back to Fiji to help the project thrive even more than it already has. I will never forget my shark friends in Fiji and the incredible conservation effort Projects Abroad allowed me to contribute to. 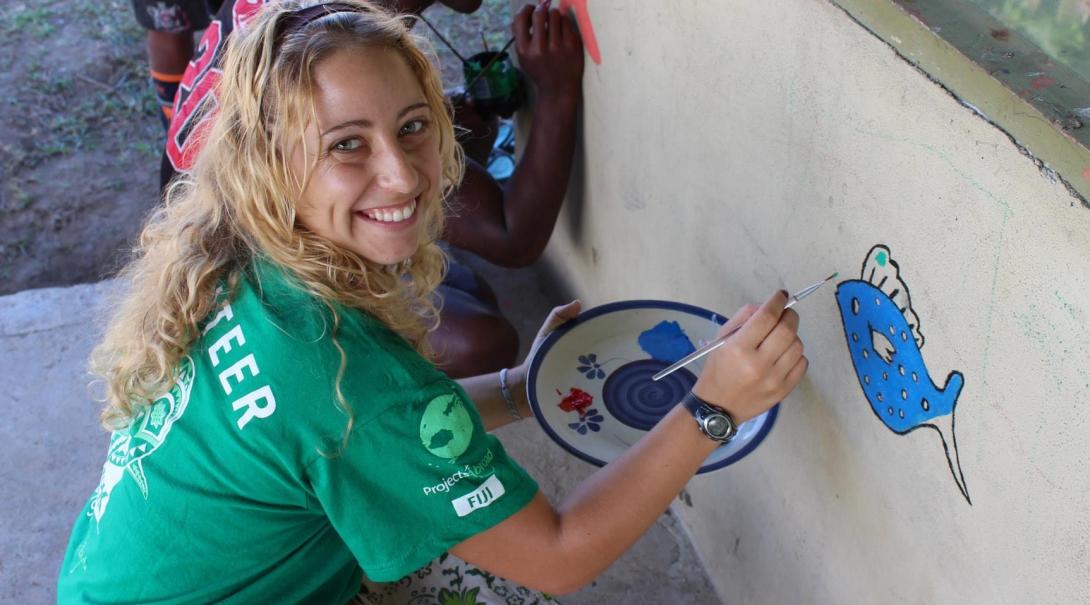