Anyone that wouldn't admit to feeling slightly apprehensive about their first trip to China would probably be lying. After all, what we know is that it's still officially Communist, the language is apparently one of the hardest in the world to learn, and that pretty much everything we buy is made in a factory somewhere in the country. Oh, and their Olympics were awesome. But that's pretty much it, right?

Having visited Hong Kong before, I considered myself familiar with some of the Chinese culture, but I was certainly surprised by what else Shanghai had to offer. Modern without losing its roots, with East and West seamlessly weaved together, and an intriguing history quite unlike most cities in China, it was a perfect place to ease into new surroundings without experiencing too much culture shock.

My placement for the next two months would be at Talk Shanghai, a monthly entertainment and lifestyle magazine covering all the vibrant goings-on in the city. My supervisor, who was the Managing Editor, was great with me and was always willing to help, as were my two colleagues from the editing team who were always ready to offer advice.

My early work involved some of the lighter ‘facts and figures' pages, odd stories from China and around the world, and trivia pages, but I was gradually given lengthier articles, working with Sam on the ‘Education' section, and writing book and music reviews (probably one of the best parts, and an excuse to go sit at the Internet café downloading music for research!).

Having only finished my A-Levels a few months previously, I was suddenly writing articles, reviews, business profiles and advertorials on a range of topics from the new city-wide basketball tournaments, the word famous quick-change artist (the ones who can change into a variety of masks and costumes in split seconds) Arturo Brachetti, and travel deals for winter breaks in South-East Asia. One of my favourite interviews without a doubt was with a company who ran etiquette training courses in Western customs and habits for the local Shanghainese. We chatted away for a couple of hours, and the nerves I felt before simply vanished, as questions poured into my mind and my notebook quickly filled up. I found myself way over my 800-word quota by the time I finished. Journalistic inspiration, I guess.

At other times catching people for interviews was more frustrating, with unanswered emails and calls, or simply trying to make the most of vague and brief answers. However, it was certainly a hugely rewarding experience, and I felt so much more confident with my journalism at the end of my placement, having had the opportunity to work independently and improved my own skills. I also got to be part of the editing team, and to see suggestions or changes that you'd picked up on being implemented was almost as satisfying (not that I'm being vain!) as seeing your name in print with the articles. It certainly didn't feel merely like an internship, and the team as a whole were accepting and friendly.

The city itself was fascinating. Packed to the seams with great bars, clubs and restaurants (although expect to pay close to Western prices), the exuberant nightlife would dwarf most cities in the world, although being from quiet North Wales, my usual standards weren't high! There would always be other volunteers, whether it was just to go out for a nice meal, or a night out, who would be up for it. I had such a fantastic time with the other volunteers, and as there were usually no more than 10 at any time while I was there, we were a close group. Whether it was helping someone ‘review' a new go-kart track or nightclub, or going to a concert, there was always something to do in Shanghai. And whenever we felt like a break, we could always just chill back at the apartment.

One of the highlights was certainly when rapper Kanye West played a show in the city. I was lucky enough to get free tickets from work (another perk!), so some of us went along, and despite the poor venue, the concert itself was great. We also went to watch the end-of-season Shanghai Tennis Masters, and saw two great games, with youngster Gilles Simon beating Federer and Murray coming out on top against Roddick in the ‘Battle of the Andys'.

My flatmate and I both took Madarin classes while we were there, and I was very glad I did, as I found myself much more confident in approaching people, even if only to ask simple requests, by the time I left. I'm hoping to continue learning, so that by the next time I go to China (and believe me, I there will be) I'm a little more fluent. But, it's hard.

And it wasn't just Shanghai either. A group of us went on a day trip to Hangzhou, planning to cycle around the beautiful lake and see some of the famous pagodas. Unfortunately, the weather disagreed, so we had to content ourselves with some limited sightseeing instead. I also went on a four-day trip to Chongqing, close to Sichuan, and sampled some of the famous hotpot – to this day I have no idea what those things they put into it were! Another weekend, we went to Nanjing, four hours away, and visited the Memorial Museum as well as Sun Yat-sen's Masoleum, and then at the end of my stay, I went on a three-day trip to Beijing. It was a fantastic experience, and I had a chance to visit the old and new, from historical sites such as Tiananmen Square and the Forbidden City to the Bird's Nest and the Water Cube. I also took a trip up to the Great Wall, which in the middle of winter, was beautifully covered with a blanket of snow. I'll never forget that feeling of standing up there. 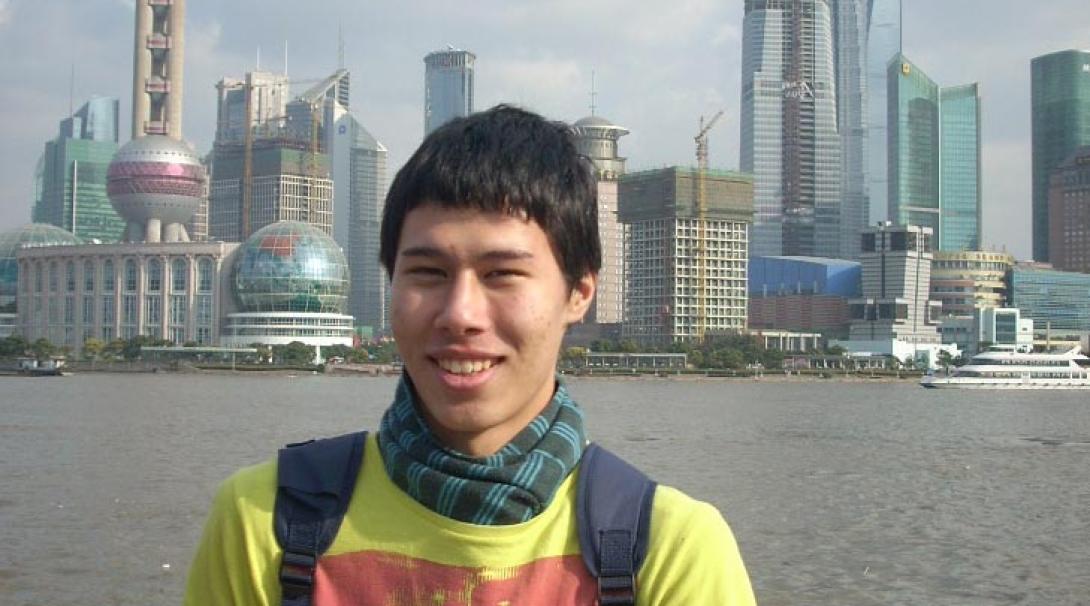